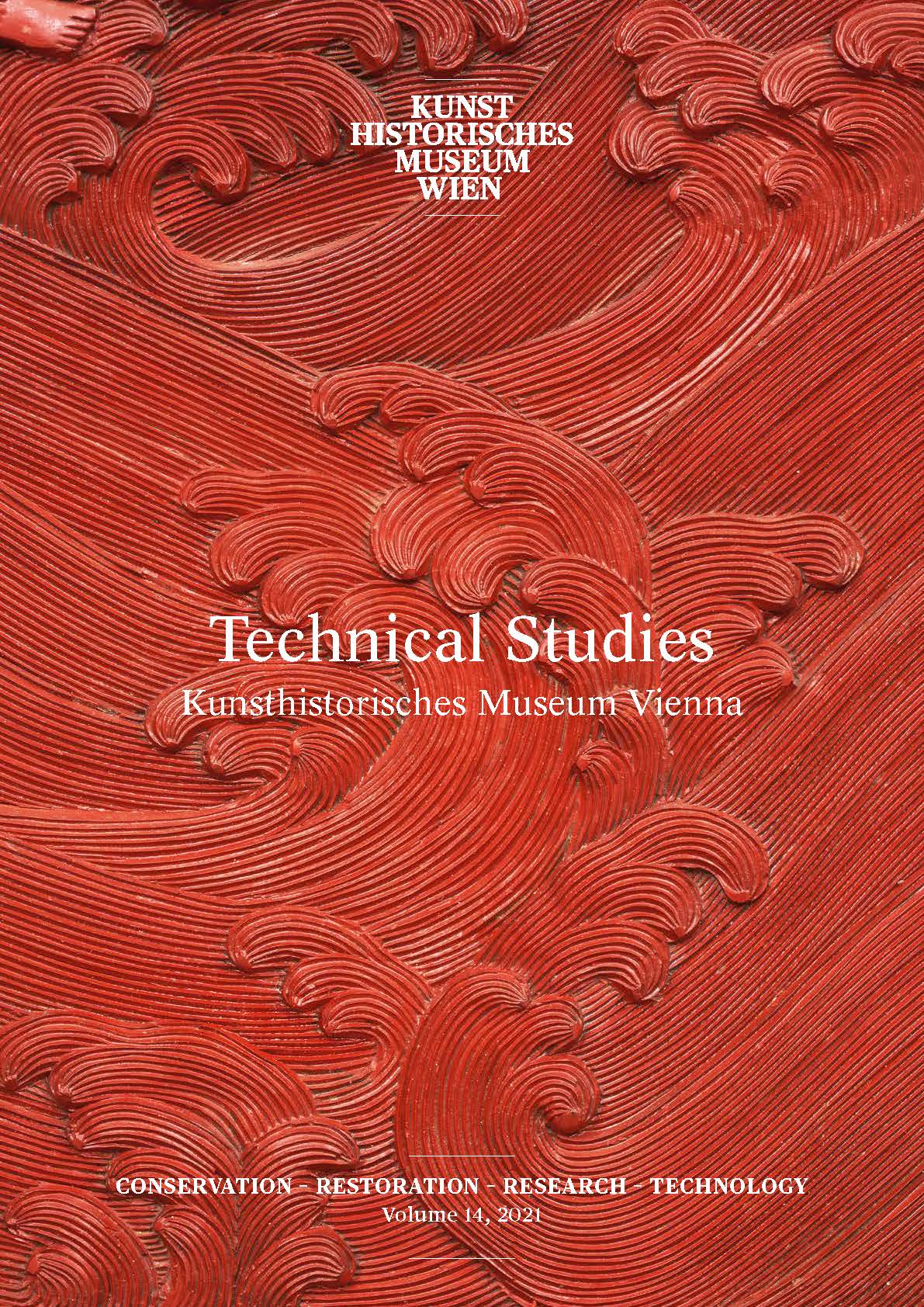 Abstract
From the beginning of the 22nd dynasty, mummies were wrapped in a linen cartonnage that was painted like an inner sarcophagus. The outer sarcophagus continued to be constructed from wood but was only simply painted: with the face and large wig, the jewelled collar, and a vertical text column with the name of the deceased.

Although there are several publications on the production of these cartonnages and even on their replication over a mould core using materials available in ancient Egypt, additional details could be observed from the six mummy cases in the Egyptian and Near Eastern Collection of the Kunsthistorisches Museum Vienna, which in comparison with similar objects from other collections revealed variations especially in the back slit and the closure of the foot end. For the latter, different materials and variations of attachment were employed.

Abstract
Following its acquisition in 1962, Garofalo’s 1520 Resurrection of Christ altarpiece, still on its original support, could no longer be presented in the Picture Gallery of the Kunst­historisches Museum from 1976, despite two rounds of conservation measures, due to severe damage. The poor condition of the monumental work (acute flaking, yellowed varnish, earlier water damage, etc.) made a comprehensive conservation treatment necessary, which was supported by an interdisciplinary research team comprised of curators, conservators, and scientists.

In preparation and parallel to the conservation measures, the scientific study of the painting technique played an important role, aided by investigations including infrared reflectography, x-radiography, microscopy, and binding medium analysis. The artist’s use of a limited selection of painting materials could be confirmed: drying oil as the binding medium for the paint layers, gypsum as the ground, an imprimitura containing lead white, and pigments including lead white, azurite, vermilion, lead-tin yellow, ochre, carbon black, and copper green are common for the artist’s period and region. The brilliant colourism of his palette, achieved through the use of a glazed painting technique, is impressive for this work and could be confirmed as typical for Garofalo’s oeuvre through comparison with his other paintings.

The treatment of the altarpiece sought both the stabilization of the endangered substance (consolidation of woodworm-damaged areas, securing of lifting paint, regluing of cracks in the support) and the unified appearance of the picture through aesthetic measures (removal of overpainting, retouching, and yellowed varnish; compensation/integration of abrasion and losses) to allow the quality of the painting’s brilliant colourism to again be appreciated. A new frame was also made and additional preventive mea­sures undertaken to ensure that this masterpiece of Ferrarese Renaissance painting remains publicly accessible in the long term.

Abstract
The technical study and conservation treatment of the imperial Chinese carved lacquer screen from the Qianlong Period (1736–1796), created in the 1770s, was one of the largest projects undertaken as part of the re­opening of the Weltmuseum Wien in 2017. Imposing and of great artistic value, the screen was removed in 1900 by Austrian troops during the so-called Boxer Rebellion from the imperial hunting park Nan hai-tze (Nanhaizi) near Beijing and transport­ed via Pula to Vienna where – after its presentation in the Imperial and Royal Natural History Court Museum – it was continuously exhibited in the Museum of Ethnology from its opening in 1928 until 2004. The depiction, spanning all three panels of the screen, shows the mythical Pantao Feast, the birthday festivities of Xiwangmu, the Queen Mother of the West. The reverse, executed in gold lacquer and gold painting, also relates to this.

The cracks and losses in the carved lacquer were consolidated and secured with Plextol D 360 and Plextol D 498 (3:2), with the addition of ground cork and organic phenolic resin microballoons for large gaps. Lifting lacquer on the reverse was set down traditionally using mugi-urushi, for which a so-called shimbari construction was also frequently employed. The secondary colophony coating on the reverse was retained, as was the presumably historic protective layer containing ibota wax. The carved lacquer surface was cleaned with a mixture of deionised water and isopropanol; the reverse largely with petroleum spirits. Losses in the carved lacquer areas and on the reverse were filled with pigmented microcrystalline wax. For the final surface consolidation on the reverse, the urushigatame method, developed in Japan, was applied. Nearly all old wood inserts had to be adjusted, and old retouching and overpaint was removed. New gold retouching on the reverse was achieved using a linseed oil mordant and gold powder. Missing metal hardware was cast and gilded galvanically.

Protected in an environmentally controlled glass showcase, the restored lacquer screen has been a centrepiece in the redisplayed collection of the Weltmuseum Wien since autumn of 2017.

The Restoration of the Fortepiano by Nannette Streicher Opus 961, Vienna

Abstract
On the occasion of the 200th anniversary of its production year in 2013, the fortepiano op. 961 (inv. no. SAM 844) by the famous and first female piano maker Nannette Streicher, part of the Collection of Historic Musical Instruments (Sammlung alter Musikinstrumente) of the Kunsthistorisches Museum Vienna, was selected as the collection’s main conservation project. At that time, the instrument was highly damaged, partially altered and rebuilt, and in unplayable condition.

Before defining the aim of the project, a hand drawn 1:1 engineering detail drawing of the whole instrument was made for documentation purposes. The time consuming close examination of the instrument’s existing state allowed the goals of the conservation to be developed gradually.

The question of playability remained unanswered, since 25% of the preserved strings appeared to be contemporary with the piece. After a detailed analysis of the scaling and stringing and comparison with period instruments from the same workshop, it became clear that not only was the present heavy stringing not original, it was also responsible for the serious damage to the wrest plank, hitchpin rail, and soundboard. The suspicion of a cracked wrest plank was confirmed by x-ray examination. After weighing the pros and cons, the whole collection team decided by mutual agreement to realize a complete restoration including playability.

The entire project took about four years. The main steps of the process are presented, including the reconstruction of the pedal rail; the restoration of the wrestplank, hitchpin rail, soundboard, and the action; and the treatment of the surface. Reflections on the scaling and an invisible method to restore a cracked wrestplank while preserving the historic material [Brosig, 2006] are also discussed. The project was funded by the TANA Trust London, Saskia van der Wel, and Fritz Heller.

Elfriede Haslauer
Studied Egyptology and classical archaeology in Vienna. Participated in Austrian excavations at Tell el­Daba and Asasif/Upper Egypt, 1968–1976. From 1971 to 1976, appointed assistant at the University of Vienna, Institute for Egyptology excavation in Egypt. From 1976, research staff member in the Egyptian and Near Eastern Collection of the Kunsthistorisches Museum, and its director from 2004 to 2006.

Ina Hoheisel
Studied conservation at the University of Applied Sciences, Erfurt, 2003–2008, with a thesis project at the Collection of Historic Musical Instruments, Kunsthistorisches Museum, advised by Alfons Huber. Remote study of Protection of European Cultural Heritage at the European University Viadrina in Frankfurt/Oder from 2009 to 2011, culminating in an M.A. Since 2009, conservator at the Collection of Historic Musical Instruments; likewise from 2019, adjunct lecturer in the main artistic subjects (Zentrales Künstlerisches Fach, ZKF) at the Academy of Fine Arts Vienna.

Ingrid Hopfner
Studied from 1985 to 1990 in the master class for restoration and conservation at the Academy of Fine Arts Vienna under Prof. Helmut Kortan and Prof. Gerald Kaspar. Employed since 1990 in the Paintings Conservation department of the Picture Gallery, Kunsthistorisches Museum Vienna with a focus on the conservation of panel paintings. From 1991 to 1994, adjunct lecturer at the Academy of Fine Arts Vienna; from 2005 to 2007, thesis advisor at the University of Applied Arts Vienna. 2011–2017, participation in the Bruegel Project of the Kunsthistorisches Museum, The panels by Pieter Bruegel the Elder at the Kunst historisches Museum, Vienna: Technical Study and Survey of their Structural Condition, supported by the Getty Foundation in the context of the Panel Paintings Initiative.

Richard Miklin
Studied German literature and history at the University of Vienna. Lecturer in German literature at the Nihon University, Tokyo, from 1988 to 1990; thereafter freelance author in Vienna. Since the 1990s also associate in the conservation practice of Silvia Miklin­Kniefacz. In this context, research on provenance, history, and art historical aspects of conservation objects, including the Vieux­laque room and the two Chinese cabinets in Schönbrunn Palace.

Silvia Miklin-Kniefacz
Studied objects conservation (specializing in metal objects) at the University of Applied Arts Vienna, in the master class of Prof. Hubert Dietrich, followed by postgraduate lectureship for the master class (1982–1988). Study of the technique and conservation of urushi lacquer and kintsugi from 1988 to 1990 at the TNRICP (Tokyo National Research Institute for Cultural Properties, with Nakasato Toshikatsu), Japan. Conservator in private practice since 1990.

Sabine Stanek
Completed studies in technical chemistry at the Vienna University of Technology in 2001 with a thesis in the field of archaeometry; thereafter lecturer at the Institute for Natural Sciences and Technology in Art at the Academy of Fine Arts Vienna. Employed as a conservation scientist in the Conservation Science Department, Kunsthistorisches Museum, from 2002; specialization in investigations addressing questions relating to paintings, materials, production techniques, and preventive conservation.