Point of View #25 presents a religious painting from the Titian holdings of the Kunsthistorisches Museum that until recently received little attention from researchers: Christ with the Globe ‒ also known as Salvator Mundi (»Redeemer of the World«). For a long time it was considered a workshop work, but recently the master's share has been increasingly discussed.

Titian (c. 1488‒1576), famous as one of the leading 16th century painters in Venice for his unconventional approach to traditional compositions, influenced European painting of the following centuries with his religious pictorial inventions.

Christ with the Globe represents another example of a religious reinterpretation, in this case within the Salvator Mundi depictions. This one differs from traditional iconography: the absence of a globe crowned with a sign of the cross and the raised hand in a gesture of blessing, both features of traditional Salvator Mundi iconography and signs of Christ's world dominion, distinguish our work. Instead, Christ displays a simple transparent glass sphere ‒ like an earthly ruler - and dispenses with the gesture of blessing. The inscription with Hebrew letters on the robe suggests a patron who sympathized with the world of ideas of the Christian Kabbalists, who saw in the Jewish secret doctrine ‒ the Kabbalah ‒ a basis for Christianity. An earlier dating from the 1520s is conceivable ‒ so far around 1530 has been favored.

The findings are due to a sponsored research project (Fund for Scientific Research) on Titian's works. In the course of this project, the paintings were examined with the help of X-rays and infrared images and examined from the point of view of painting technique. In the case of our Christ, a completely different composition - a Madonna and Child - came to light - parts of which can be linked to other works by Titian.

These and other results from the technological investigations that support the attribution to Titian are the content of Point of View #25. 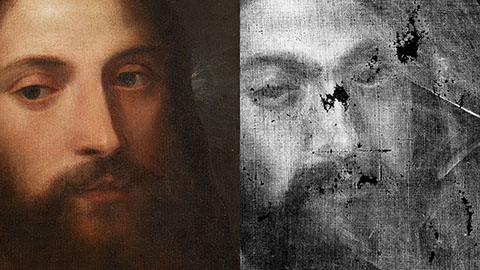