The Master of Heiligenkreuz

This Kunstkammer exhibition brings together for the first time all extant works by the anonymous artist known as the Master of Heiligenkreuz. In 1926, the Kunsthistorisches Museum acquired the seminal work of a painter regarded as one of the most extraordinary and mysterious artists active at the turn of the fifteenth century in Austria: recently restored, the inner panels of the diptych from Cistercian abbey of Heiligenkreuz (in the environs of Vienna) depict, respectively, the Annunciation and the Mystical Marriage of Saint Catherine.

Today displayed in the Kunstkammer, the subtle handling and graceful figures indicate that the anonymous master must have trained with an artist working for the court in Paris. From there, the Frenchman seems to have moved to Austria because he used local oak panels for the diptych now in Vienna. Today, only four other works by the master (or his workshop?) are known, of which the two panels now in Cleveland and Washington depicting, respectively, the Death of the Virgin and the Death of Saint Claire – presumably come from the same altarpiece that may have been commissioned by a Bohemian patron. The artist’s unique idiom is also discernible in the small Mystical Marriage of Saint Catherine in the Belvedere Museum in Vienna and a disputed diptych in Basel. 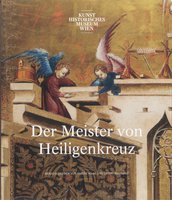