Leda and the Swan

Leda and the Swan by Joseph Heintz the Elder (Basel 1564 – 1609 Prague) was lost for centuries and only recently rediscovered. The artist worked at the imperial court from 1591, and, as the date below his monogram tells us, he produced this painting in 1605 for Emperor Rudolf II (ruled 1576 – 1612). The Habsburg monarch resided at Prague and had a penchant for erotic-mythological subject matters: a number of other works in his renowned collection also depict the story of Jupiter, the father of the gods, who visited beautiful Leda disguised as a swan.

Thanks to three extant preparatory sketches, two of which are on in the exhibition, we know more about the genesis of this composition than of any other work by Rudolf’s court painter. In the smaller of the two drawings from the Albertina he has already determined the final pose of the ravishing beauty, who is now giving us her back. In the second, much larger Albertina drawing her pose is more or less identical to the finished painting: tiny indentations made by a stylus trace her contours, telling us that she was mechanically transposed onto the grounded copper plate.

The starting point for this composition was presumably a classical version of this subject matter of which a number of examples have come down to us. Her delicately modelled body and the sensitive handling of the enamel-like shimmering surfaces are clearly inspired by the Correggios and the Parmigianinos (e.g. his Cupid) in Rudolf’s collection (at present on show in Room 3). Some of the Museum’s paintings on copper by Hans von Aachen and Bartholomäus Spranger are also included in this small exhibition, and they illustrate how deeply the cabinet paintings produced at the court of Rudolf II are informed by the sensuality that characterises the works of these two Italian Renaissance masters.

The picture is first mentioned in the 1621 inventory of the imperial collections at Prague, where it is listed as no. 1137: “Leda with a swan by Joseph Hainz”. Only two years later, Emperor Ferdinand II (ruled 1619 – 1637) sold the small copper picture together with a number of other paintings and goldsmith works to Daniel de Briers, an art dealer and jeweller in Frankfurt/Main, in order to pay for some costly jewellery commissions. Since then the painting was believed lost. Hans von Aachen’s Tarquin and Lucretia was also among the fifty-six paintings from Rudolf’s collection at Prague that were sold in 1623. The Museum was only able to re-acquire the large-scale history painting on show in Gallery IX in 1993. Now another of those paintings sold almost four centuries ago – Leda – is reunited for three months with the largest extant part of the splendid painting collection assembled by Rudolf II. 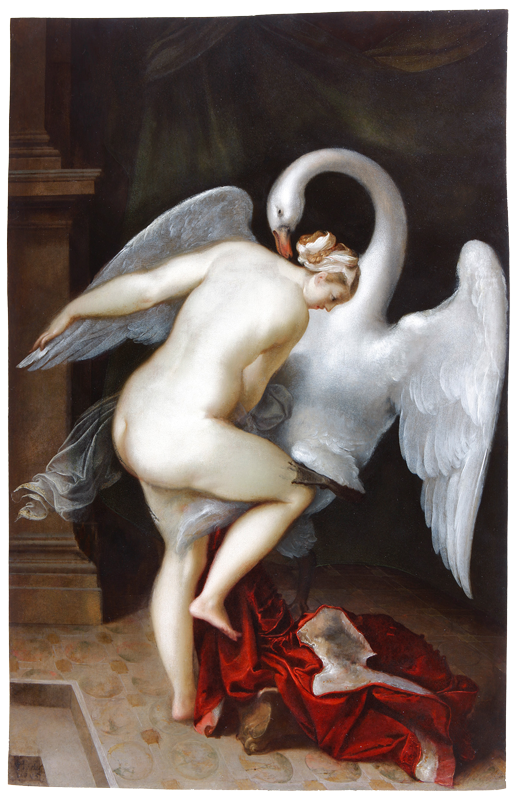