…a retrospective of works by the Austrian Symbolist Anton Josef Trcka and curated by Dr. Monika Faber.
"Antios" in strangely winding letters can be found repeatedly on portraits of Egon Schiele. The portraitist behind this pseudonym, Anton Josef Trcka, was born in Vienna in 1893. Not only is he forgotten, today, he hardly even existed in the consciousness of the contemporary art scene of his time.

He was so little the conformist as a poet, painter and photographer that he never belonged to any group and almost never found an opportunity for exhibition or publication. And yet within a small circle of painters, dancers and writers he was considered a brilliant portraitist. Egon Schiele, Gustav Klimt and many others held his paintings in high regard and recommended them to friends, who preserved them during their emigration. Prints of his drawings and copies of his poems were passed along. After Trckas death in 1940, his atelier was a refuge for the ostracised spiritual movement of anthroposophy in Vienna. In 1944 a bomb there destroyed almost his entire lifes work.

The widely scattered items that survived have now been brought together for the first time. The artistic works created between 1912 and 1930 allow us to reconstruct the personality of this artist, who throughout his life wavered between the influence of art in Vienna and that of the Bohemian homeland of his family. The expressive language of Egon Schiele can be found in Trckas photography side by side with Symbolist echoes and motifs from Czech folklore.

The photographer, painter and poet Anton Josef Trcka was born in Vienna on September 7, 1893. His parents came from Moravia and brought up their three children to be conscious of their Czech nationality. Trckas life and work were marked by an inner conflict between his inclination to Slavic influence and the fact of his life in Vienna with the influence of the artists there. He was, for example, a friend of both the nationalist Czech poet J. S. Machar and the eccentric Viennese poet Peter Altenberg.In 1911 he entered the Royal and Imperial School of Graphic Arts, where Karel Novak became his teacher. Trcka experimented with new photographic techniques. Some of his pictures were produced both in silver bromide and bromoil prints, and thus as mirror images. Often the background of the negative was altered with a brush in order to realise the young artists visual ideas, which had been influenced by Symbolism and the Pre-Raphaelites.

At the beginning of 1914 the artist met Egon Schiele, who performed the expressive gestures and poses of his self-portraits before the camera. Apparently the photographer had previously prepared reproductions of paintings for the artist, who was only a few years his senior.

The gestural language of Schiele, which was related to "New Dance" and likely also to French scientific documentation of the body language of hysterical women, contradicts everything that was typical in portraits up to that time. Trcka was already signing his works with "Antios" (a combination of his two first names). With his style related to the "classical" portrait of the 16th century with its frontal structure and the integration of writing he was able to create an ideal framework for the unusually expressive postures of the painter.Just as Schieles portrait style was to influence Trckas photographic human portraits in the coming years, the young photographers landscapes and his early water-colours show his admiration for Gustav Klimt and the two-dimensional ornamental structure of his paintings.At the same time Trcka concerned himself with Czech folklore, for example, with the kind of floral ornaments familiar from old embroidery. From this he developed a highly individual, almost abstract water-colour style.

The direct or indirect contact with Czech artists of the so-called "Prague Modern" movement also drew Trckas attention to the religious motifs typical of his great role models, the poet Otakar Brezina and the sculptor Frantisek Bilek.

In 1915 Trcka met the poet Anna Pamrova, who introduced him to Brezina. Their idealistic-ascetic image of artistry had as great an influence on the young man as did Rudolf Steiner and his anthroposophical society, which Trcka was drawn to by his future wife, Clara Schlesinger. 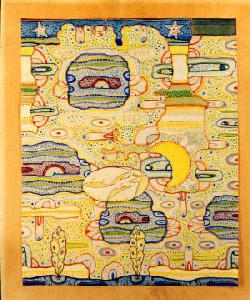 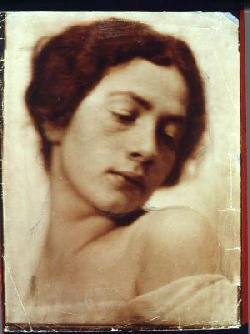 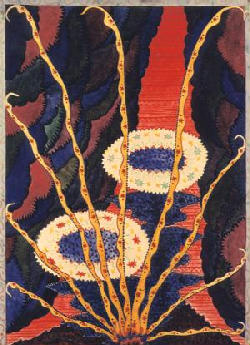 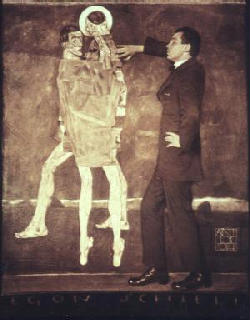