History of the collection

The Picture Gallery had its origins in the 16th and 17th centuries and by the end of the 18th century already existed for the most part in its present form.

Great collectors of the House of Habsburg, such as Archduke Ferdinand II (1529–1595), Emperor Rudolf II (1552–1612) and Archduke Leopold Wilhelm (1614–1662), determined in a decisive and lasting manner the character of the collection. But it was not until the 18th century that the various holdings were brought together and displayed in Vienna’s Stallburg. In 1781 the paintings were moved to the Belvedere Palace. The innovative, systematic presentation there is considered an important moment in the history of the modern art museum. Ever since that time the Picture Gallery has been open to the public. In 1891 the Picture Gallery along with the other imperial collections were finally moved into the recently completed Kunsthistorisches Museum on Vienna’s Ringstrasse.

The Collection of Rudolf II.

Even though most of the paintings from the collection of Emperor Rudolf II were scattered to the four winds after Swedish forces plundered Prague in 1648, his collection remained a point of departure for later Habsburg art patronage. Among the fragments of Rudolf’s gallery found in Vienna today are the following masterpieces: the Bruegel collection, which had come from Rudolf’s brother Ernest, the Dürer holdings and works by Rudolf’s court painters in Prague. These and a number of masterpieces of Italian Mannerism (Correggio, Parmigianino) must have been particularly in keeping with Rudolf’s preference for sensual subjects.

A decisive figure in the founding of the Vienna Picture Gallery is Archduke Leopold Wilhelm (1614-1662), the brother of Emperor Ferdinand III. The archduke was regent of the Netherlands (1647-1656) and was able to take advantage of the political situation towards the end of the Thirty Years’ War, including the revolution in England, to acquire wonderful paintings. In addition to the collections of Buckingham and Hamilton, both of whom had collected outstanding works of (northern) Italian art, the archduke was also able to purchase masterpieces of Early Netherlandish and contemporary Flemish painting in the commercial centres of Antwerp and Brussels. He did so not only in his own interest but also for his brother, Emperor Ferdinand III, in Prague. These paintings were intended to replace those looted by the Swedes. In this manner, Leopold Wilhelm assembled a collection of around 1400 pictures. In 1656 they were brought to Vienna, put on display in the Stallburg, and catalogued in an exemplary manner. In 1662 they came into the possession of Emperor Leopold I. 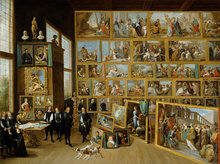 Zoom
David Teniers the Younger: The Archduke Leopold Wilhelm in His Gallery at Brussels

The Habsburg collector Leopold Wilhelm, accompanied by his gallery director, David Teniers, and several other people, is depicted against a decorative background of paintings. The view is of the archduke’s gallery in Brussels, where he assembled one of the most important painting collections of the 17th century during his tenure as regent from 1647–56, providing an important basis for the Vienna Picture Gallery today.
Through the purchase of several large art collections that came onto the market following the revolution in England (1648), Leopold Wilhelm saw his gallery grow enormously within a short period. By the time he returned to Vienna in 1656, it contained around 1400 pictures. Most of the 51 Italian paintings depicted here are today in the Kunsthistorisches Museum.

In the early 18th century Charles VI decided to bring together in Vienna the Habsburg dynasty’s paintings from the various residences. His own artwork, which in part he had brought with him from Spain, was redisplayed together with the holdings of Ferdinand II from Prague Castle and the collection of Leopold Wilhelm in Vienna’s Stallburg, which had been extensively renovated for that purpose. The display was planned along Baroque principles, which called for a decorative total concept.

In 1728, in the course of this undertaking, Charles VI commissioned the Neapolitan painter Francesco Solimena to paint a large dedicatory painting that would be a lasting monument to the emperor and his appreciation of art: with a solemn gesture the imperial architect Gundaker, Count Althann hands the emperor the inventory of his newly displayed collection. Charles VI also had Ferdinand Storffer make a painted inventory, which today conveys to us an idea of the appearance and the holdings of the imperial gallery in his day.

Redisplay in the Upper Belvedere

Fifty years later, the late Baroque style in which the paintings were hung in the Stallburg must have seemed stiff, inflexible and anachronistic. In addition, many large-format Flemish and Italian altarpieces from disbanded cloisters and churches had been added under Maria Theresa and Joseph II in the late 1770s and 1780s.

In 1776 Maria Theresa decided to open to the public the imperial Picture Gallery in the Upper Belvedere, the former garden palace of Prince Eugene of Savoy. By 1781 this redisplay according to a historical perspective was complete; the spirit of the Enlightenment with its demands for educational and systematic display were palpable. To accompany the opening of the gallery, a catalogue of the paintings was published in German and French. This was one of the first public catalogues to be compiled according to scholarly criteria. The layout included in the catalogue reveals the principles according to which the pictures in the Upper Belvedere were arranged. The innovative, systematic presentation in the Belvedere Palace is considered an important moment in the history of the modern art museum.

The New Institution in the 19th century

The occupation of Vienna by Napoleon’s troops in 1809 resulted in a considerable loss of pictures, and in the
19th century collecting activity for the imperial collections came to an almost complete halt. In the last quarter of the century, attention turned to the internal and external reorganisation of the entire Habsburg art holdings. Between 1871 and 1891 Gottfried Semper and Karl Hasenauer constructed a new building, the Kunsthistorisches Museum, on the Ring, and the Picture Gallery is still housed on its main floor today.

Following the end of the First World War and the collapse of the Austro-Hungarian Empire in 1918, the imperial collections became the property of the new Republic of Austria. After 1945 the collection was again restructured, and parts of it were moved. The Austrian Gallery received all of the Austrian paintings.

Like all the great royal collections of paintings in Europe, the Kunsthistorisches Museum’s Picture Gallery is practically complete; new acquisitions are made only to round off and put the final touches to the existing collection, not to change it in any fundamental manner. Nevertheless, the collection is not “dead”; its life is constantly being renewed by its visitors, who are always bringing new insight to bear, even on works they may have often seen before, giving them new life.