In 2019, the Academy of Fine Arts Vienna, in collaboration with the Kunsthistorisches Museum Vienna and the Verein zur generationsübergreifenden Kunst- und Kulturförderung, announced a prize competition for students to submit works dealing with the subject Manifestations of Secular and Spiritual Power.

Now the Kunsthistorisches Museum Vienna presents the works of the three winners: this audacious show juxtaposes the Imperial Crown and the so-called Vienna Gregory tablet, both thousand-year-old icons of European art history, with the works of students and recent graduates. This is a new and up-to-date interpretation of the official wish voiced in 1878 that the Kunsthistorisches Museum should ‘bear witness to the connoisseurship and the munificence with which the rulers of Austria have always endeavoured to support the arts and sciences’: it offers an open society a space to discuss traditions and renewal. 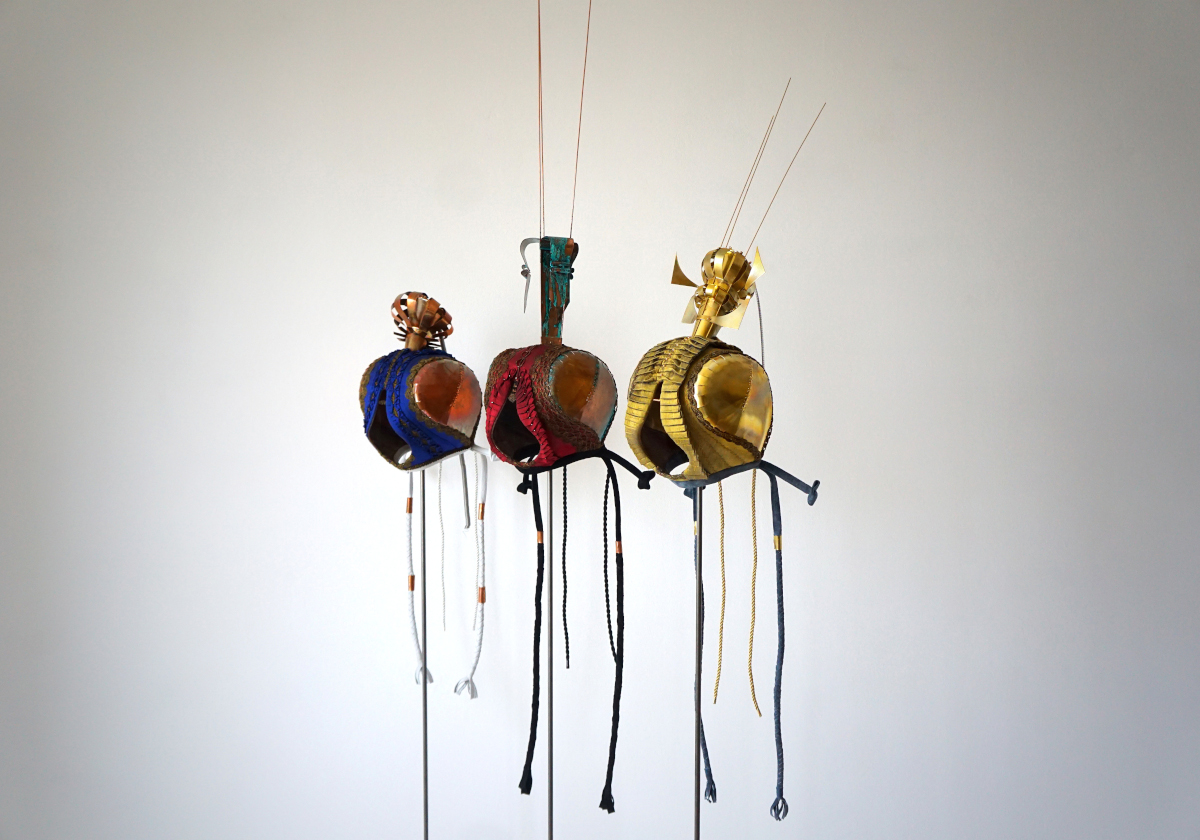 In her work, Patrizia Ruthensteiner examines the symbolism of insignia and how they function as the legitimisation of class, status, and territory. A cluster of wings encircles two surmounted crowns of the Virgin. It hides the wearer’s identity and makes eye contact impossible between them and the spectator. Note also the eight flanking hoods designed to be worn by humans (rather than falcons) surmounted by different crowns. Put them on, and your vision is obscured but you hear the sound of the metal feathers attached to a membrane and integrated into the crowns. The falcon is celebrated as the aristocrat of the sky, as a messenger between heaven and earth, as a mediator between the profane and the sacred who flies across the boundaries separating this world from the next. 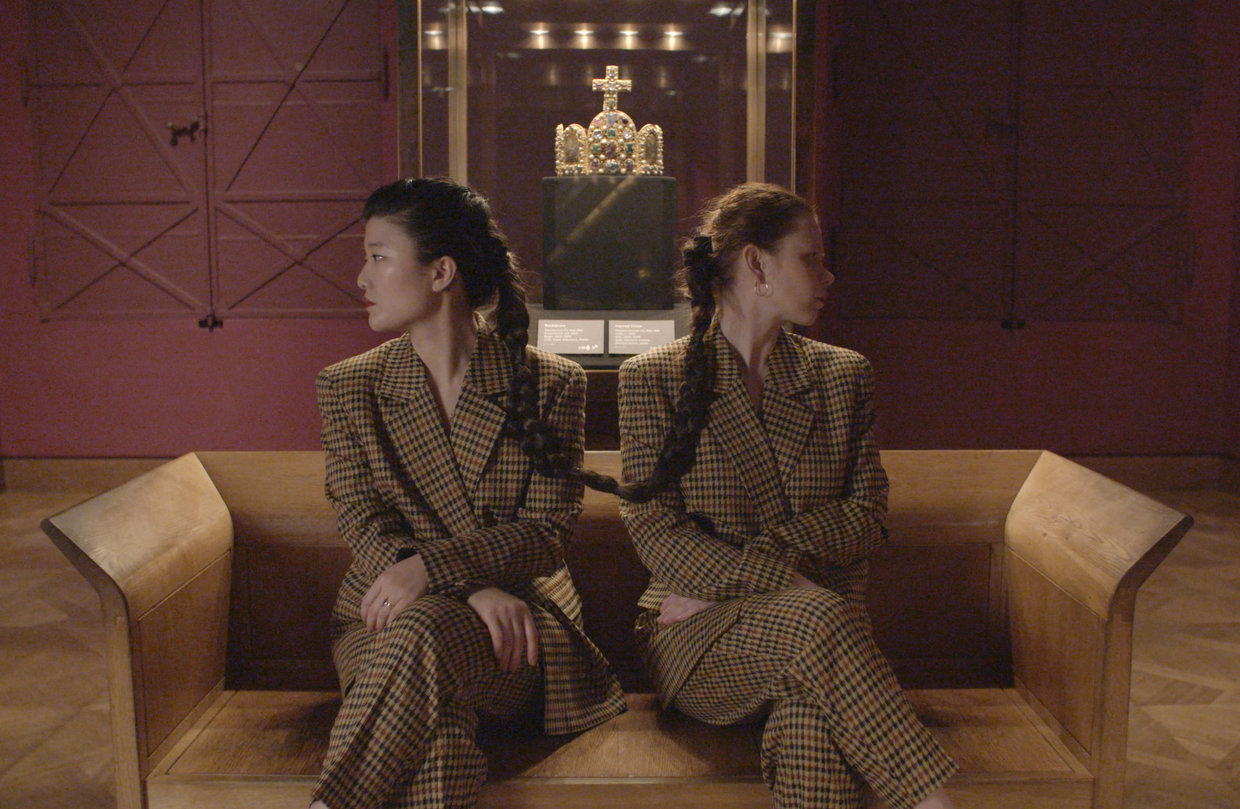 Maybe I manifested it

This video installation, from which the exhibition borrowed its title, shows the two artists as a double-headed hybrid creature conflating sacred and secular power in their attempt to approach the Imperial Crown, to insert themselves into the museum, to subordinate themselves to history or to question it. By interrupting their own shots with found footage they create a carpet of different levels of perception and references, something like a stream of consciousness that invites spectators to associate. 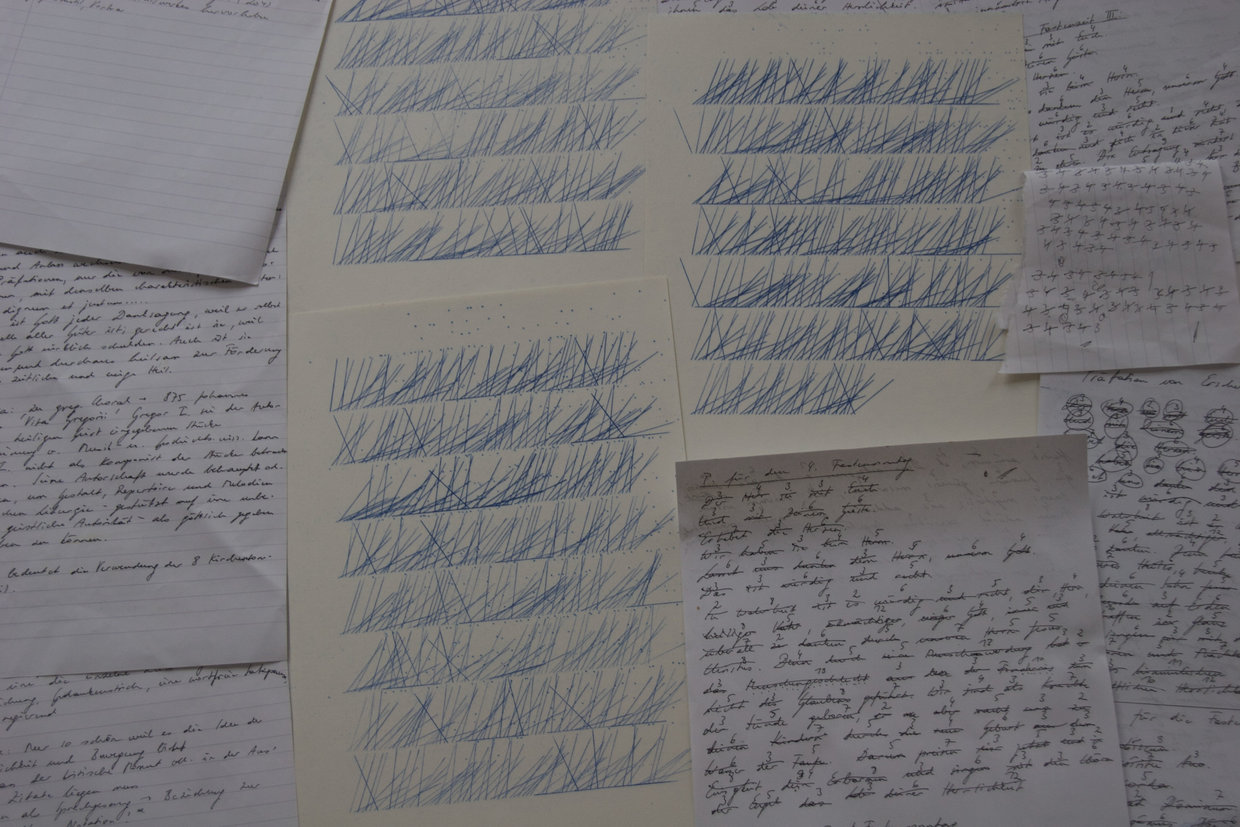 Bent over his book, Pope Gregory I is busy noting down what the dove perched on his shoulder is whispering in his ear. His scribes are copying what he has written. The subject depicted on this ivory plaque has inspired the artist’s writing exercise: bent over a piece of paper, lines drawn with the help of a ruler are replacing the connected loops, the copying and stringing together of prefaces by counting the number of letters in words, while the days of summer numbered by the Sundays of the liturgical year pass by. Like a textile, the prayers settle down under the carbon paper, follow the direction of the lines, form a chapter.