In 1797 and, almost a century later, in 1889 two treasures were unearthed on the same plot of land in what was then Hungarian Szilágysomlyo (now Simleul Silvaniei, Romania). Today, they are housed in the Kunsthistorisches Museum in Vienna (formerly the Imperial Collection) and the Hungarian National Museum in Budapest respectively. Today, it is almost universally accepted that both treasures originally belonged together.

Both were part of one ensemble, which had been buried in two separate though proximate places and had later been accidentally discovered at two different times. Almost a century after the discovery of the second treasure both will now be on show together for the first time first in Vienna and then in Budapest.

Two shepherd boys picking plums discovered the first treasure by chance on 3rd August 1797. It consists of a series of 17 medallions (three of which are now lost) each with a hook and some framed, a unique gold chain with 52 pendant amulets, as well as 24 gold foil rings, a disk shaped pendant, a ring, the fragment of a bracelet, and a pendant in the shape of a human figure. The second treasure, found on 20th April 1889 by a day-labourer planting potatoes, consists of a magnificent onyx fibula, ten precious pairs of fibulae decorated with gold and jewels, a swearing-in ring and three gold bowls.

In all, there are 73 magnificent gold and silver objects, weighing a total of 8 kilograms (about 16 pounds). They testify to the relations between the Romans and the eastern Teutons during the 4th and 5th century AD.

The treasures of Szilágysomlyo richly illustrate the mixture of "barbarian and Roman elements and thus mirror the political situation in the Carpathian basin during the period between AD 290 and 433 to 445. In the oldest objects from both treasures, dating from the 4th century such as the Roman medallions (minted between AD 290 and 378) or the imperial or onyx fibula Roman elements dominate. But the Roman medallions were set or imitated by Teutonic goldsmiths. The ornate fibulae were mainly produced in workshops organised by Romans and geared towards the requirements of the Teutonic aristocracy; they are characterised by Teutonic elements. Both the ornate fibulae of the second treasure and the medallions and the gold chain of the first treasure are first-class examples of the high quality of artistic craftsmanship found during late antiquity: the onyx fibula and the largest extant antique gold medallion clearly illustrate the superlative quality.

Magnificent jewellery comprising gold and precious stones played an important role in the representation of social groups during the period of the late Roman and the early Byzantine Empire. In order to express social status and rank, imperial laws restricted the use of precious metal jewellery and certain precious stones. The Byzantines continued the tradition of presenting barbarian generals and rulers of neighbouring small states with rich gifts documenting their allegiance to the empire. As archaeological finds the treasures of Szilágysomlyo complement written sources and are particularly suited to illustrate the behaviour and aspirations to rank of barbarian generals. The signs of wear noticeable on all objects prove that they were in use until they were buried. Apparently the owners wore their impressive treasures until the end, thus documenting to everyone their power, rank, wealth and close connection with the Roman Empire probably considered the superior culture.

Judging by the weight of the finds one can assume that the treasures of Szilágysomlyo were assembled over a period of about 150 years by an eastern Teutonic, possibly Gepdian, royal dynasty. They were probably buried during the 2nd quarter of the 5th century, an action presumably prompted by an exceptional political event.

The treasures of Szilágysomlyo are prime archaeological sources helping to throw light on the early period of the Migration. They consist not only of magnificent jewels, undoubtedly among the most precious objects from that period whose exclusive character cannot be surpassed. Their important value as a historical source makes a thorough research of the objects seem particularly rewarding. Thus, the catalogue accompanying the exhibition will contain not only detailed descriptions of the objects but also the newest results of scholarly research on the gold treasures of Szilágysomlyo. 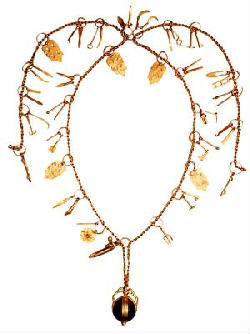 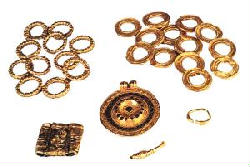 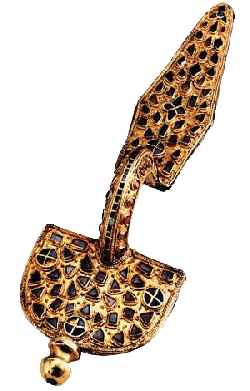 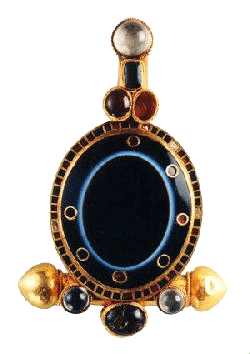 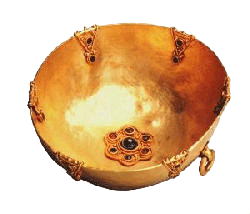 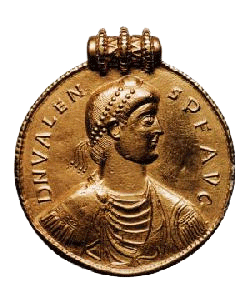