Islamic Art of the Fatimid Era

The Fine Arts Museum of Vienna presents for the first time fine arts and culture of the Fatimids, one of the most successful dynasties of the Islam. Its reign lasting 200 years from 969 to 1171 a.Chr.marks a glorious highlight in the history of Islamic Egypt.

The exhibition presents about 270 objects, mainly from the Museum of Islamic Art in Cairo, from a collection in Kuwait, the National Museum in Damaskus, the Benaki Museum in Athens, the Israel Antiquities Authority, the Institut du Monde Arabe in Paris and the Museum of Islamic Art in Berlin as well as from further numerous museums in Europe. Austrian museums too sent important contributions as the MAK, the Collection of Papyrus Manuscripts of the National Library, the Museum of Klosterneuburg Abbey and the Fine Arts Museum.

The Fatimids consider themselves descendant to prophet Muhammad´s daughter Fâtima and therefore they claim the prophet´s succession. Lead by this political and religious sense of mission they tried to predominate over the whole Islamic world despite the political tensions between Berber tribes in North Africa, the Caliphs of Bagdad, Byzantium and the later crusaders too.

For the first time they appear in the middle of the 9th cent. in Khûzistân at the Arabic-Persic Golf, today Iranian territory, as leaders of a Schiite sect, the Ismailits. From 910 to 973 the Fatimids ruled as Caliphs in Ifrîqiya, today´s Tunesia. Their Caliphate was a Schiite Ismailite Counter-Caliphate to the Sunnite Caliphate of the Abbasides of Bagdad. Its power extended over the whole Maghreb to the Moroccan Atlantic coast.

969 Egypt, a province of the Caliphate of Bagdad, submitted after inner crises to the protection of the powerful Fatimid Caliphs of Maghreb. Some kilometers north-east of the old Egyptian metropolis al Fustât, the new Palace-City Al Qâhira (Cairo) was errected. Since 973 it arrose as Caliph´s residence to a splendid metropolis for the whole Fatimid epoch. The Fatimid Caliphate´s influence extended over the Fatimid provinces of North Africa and Sicily to Mecca and Medina as far as to Palestine, Syria, the Red Sea and to the Yemen.

But since the 2nd half of the 11th cent. a gradual decline occurred. Many territories fell off, Syria and Palestine and many other important cities at the eastern Mediterranean coast got lost because of the first crusade (1096-1099). The Caliphate of Cairo was shrunk to the Egyptian territory and some small regions in the North-East and the West. The Ismailits´ sect was split in a schism which survived up to our days. The Christian King of Jerusalem, Amalrich, occupied Cairo with a Frankonian crusader´s army in the sixties of the 12th cent. and made it a crusader´s protectorate. Fianlly Salâh al Dîn (Saladin), the Syrian officer of Kurdestan origin dismissed the last Fatimid Caliph 1171, took an oath of allegiance on the Abbasides, returned to the Sunna and established the Ayyubidan dynasty.

The exhibition is divided in four sections. The first presents the Palace-City of Kairo which was residence, siege of the central administration of the empire as well as garrison. Wood carving freezes with contemporary scenes musicians, haunting scenes, fighting animals from the Museum of Islamic Art in Cairo give us a sense for the splendour of the palaces, arsenals, warehouses, mosques, libraries and other numerous places. The Fatimid architecture stands out mainly for the richness of marble and plaster decoration, wallpainting and wood carving panellings. Jewellery, glass, rock crystal vessels, textiles, objects of ivory, wood carving and metal works bear witness of court life. Examples of calligraphy and illustrations are preserved in the Collection of Papyrus Manuscripts in the Austrian National Library. The Fatimid treasury must have been of immeasurable extent.

The second section deals with the Fatimid religious life which is represented by ornamented prayer-niches of mosques, funerary steles and sheets of manuscripts of the Koran. The Caliph was the chief (Imâm) of the Schiite sect of the Ismailits. The great mosque al Azhar (the "Shining Mosque) was built in the South-East of Cairo from 970 to 972. The Fatimids were tolerant both of the Sunnit Muslim population in Egypt and Palestine-Syria and of the Coptic Christians.

Utensils as ceramic, glass vessels, lampadaries, marble vessels, coins, weights and fragments of garments give us an impression of everyday life in the Fatimid empire.

The fourth part of the exhibition is dedicated to the influence and after-effect of Fatimid fine arts. In Sicily which was in subject to the Fatimids from the early 10th to the end of the 11th cent., the Fatimid fine arts´ influence is still alife in the time of the Normans. Many monuments as the Palace in Palermo with the Capella Palatina, but also cathedrals show the deep influence of Isalmic Fatimid forms whose impact reached as far as the palace architecture of the Hohenstaufen dynasty in Italy. The royal workshops in Palermo employed Muslim craftsmen who also made the Coronation Mantle for King Roger II today in the Secular Treasure Chamber in Vienna in 1133/34. Numerous products of Muslim trade and manufacturing enterprises in Sicily and South Italy as ivory caskets and oliphants, horns made of elephant tusk two examples of the Fine Arts Museum are on shown show the characteristic Fatimid carving as vine scroll pattern, animals and birds. After the pillage of the treasury in the Fatimid Caliph´s Palace in Cairo 1068/69 as a result of inner crise several thousands of valuables found their way via the bazaars of Cairo into the Mediterranean trade and many of them further on into European church treasuries, where they were directed to Christian use, for example as reliquaries or vessels for consacrated substancies. The famous rock crystal jug from the treasury of San Marco in Venice, which is part of the exhibition, reached Europe probably on this way. Many other Fatimid articles reached Europe in the Medival Age either due to the intensified Mediterranean trade via pilgrims or as spoils during the crusades. 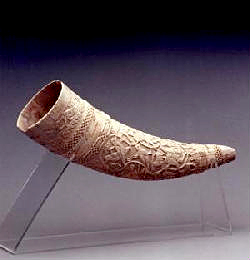 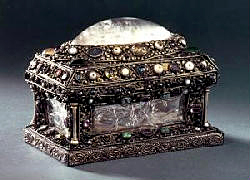 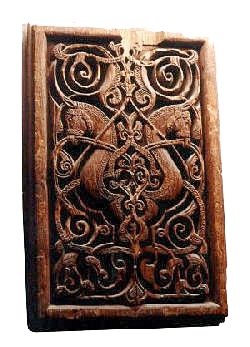 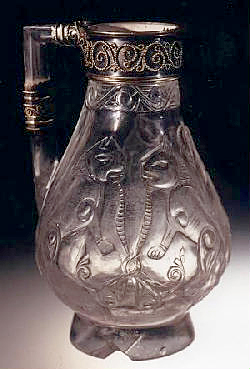