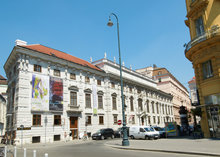 The Lobkowitz Palace was the first important town palace built in Vienna after 1683. Philipp Sigmund Count von Dietrichstein commissioned Johann Fischer von Erlach with the building of it. In 1745, the Lobkowitz, a very musical family, took over the palace. Philipp Emanuel Bach, Christoph Willibald Gluck and many other famous artists played for them. In 1804, the palace was the venue for the first private performance of Beethoven‘s Third Symphony, the „Eroica"; in 1807 his Fourth Symphony was also first performed here. During the Congress of Vienna, many magnificent balls and receptions were held at the palace. It was the venue for numerous formal receptions, elegant soirees, concerts and balls. Continuing this tradition, we offer you the opportunity to stage events in one of Austria‘s most beautiful baroque palaces. 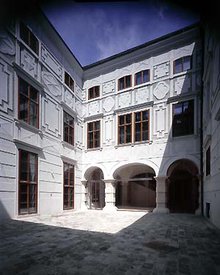 Warm summer evenings will tempt you to plan your next concert, theatre performance, reading, a unique ‚Heurigen‘-evening or summer (night‘s) party in this handsome baroque courtyard flanked by wide arcades. Also in winter, the courtyard can be used for welcome cocktails or special outdoor exhibitions.

The Foyer on the First Floor 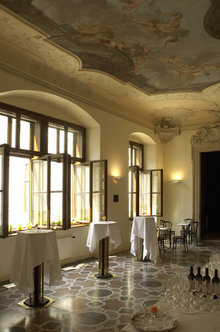 The Foyer leading to the Eroica Hall is an ideal venue for cocktail receptions or welcome drinks, or can serve as the location of the buffet during a dinner held in the Eroica Hall. The baroque ambience is also a perfect setting for refreshments served during the intervals of a concert. 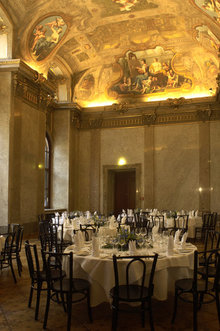 Follow in the footsteps of famous historical personalities and plan soirees and receptions with classical music. But the Eroica Hall is also an elegant stage for special occasions such as weddings or graduation ceremonies! The baroque state room is the ideal setting for all kinds of festivities and events, concerts and Lieder performances, book presentations or symposia. It is also a sparkling setting for elegant (candle-light) dinners.

Celebrate your wedding in the Theater Museum 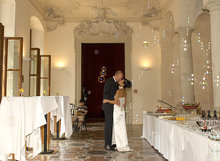 The Theatre Museum provides an appropriate environment and atmosphere for your wedding. Spend the most beautiful day of your life in our gorgeous palace! The baroque Eroica-Hall offers the perfect ambiance for your civil marriage.

Enjoy its solemn atmosphere for your marriage ceremony and relish the magnificent Vestibule for a subsequent agape. If the weather is fine, you can (if available) also use the courtyard as your own private stage.

Do you just want to surprise your guests?
We offer a private opening.