The primary scope of the REBRE project is to follow-up a previous comprehensive research on Italian Renaissance bronze sculptures by accessing the data and by exchanging the expert knowledge in a co-operation with Italian colleagues from Opificio delle Pietre Dure (OPD) in Florence. Both institutions, the Kunsthistorisches Museum (KHM) in Vienna and the OPD have already been deeply involved in this field. Particularly at the OPD, studies on the composition of both bronze alloys and coatings, techniques of the casting and the provenance of these artefacts have been carried out, while in the KHM the organic coating (“patinas”) research has been performed aside from the provenance research (see the previous project on the KHM website).

The topic dealing with the Italian Renaissance bronze sculptures is rather specific. To better understand the conditions of single objects, to assist the art-historical interpretation, and to enable the development of the best-suited conservation treatment, an extensive scientific investigation of the composition of the materials is necessary. Although the previous results have already been published in numerous publications [1-3] still some unanswered questions remain open. Previous analyses have shown that the composition of patinas appears to be quite similar. They are oil or oil-resinous varnishes. The specific colour of the coatings applied to the surface of the bronze statues does not necessarily involve pigments. Instead, the colour is developed by the baking process of the varnish. Thus it seems that the final tint and the structure of the organic coatings do not depend to such an extent on the used materials, but on the process of their application, on how they have been applied on the surface of the metal. Also the idea to associate a particular artist with a particular varnish recipe could not be confirmed. The difficulty is caused by various factors, especially there are variabilities as thicknesss of the varnish, exposition to light, etc., which play an important role and could even vary in different parts of the same statue. It appears, for instance, that the sculptor has been having a very individual approach towards each artefact. According to our observation, a broad variety of varnishes may have been used by the same artist, while it is also possible that quite similar varnishes have been used by different workshops.

The investigation on the stratigraphy and analyses of the composition of both inorganic components and organic binding media include examinations performed by optical microscopy (OM), scanning electron microscopy with energy-dispersive X-ray analysis (SEM-EDX) and gas chromatography-mass spectrometry (GC-MS) directly in the KHM, and Fourier-transform infrared spectroscopy (FTIR) measurements done in the OPD. It became clear that the material complexity of the samples is causing immense difficulty at the interpretation and identification of particular materials. The newly varnished mock-ups (bronze coupons) from OPD could contribute to explain the changes in the patinas’ composition caused during their baking process, namely by studying the varnished coupons before and after their thermal treatment using GC-MS.

During the discussion with the OPD metal conservators a detailed time-line for our collaboration in the frame of the PhD thesis running at the OPD was set and new literature sources and reference mock-ups (varnished bronze coupons) for advanced investigations of organic patinas by gas chromatography were provided. 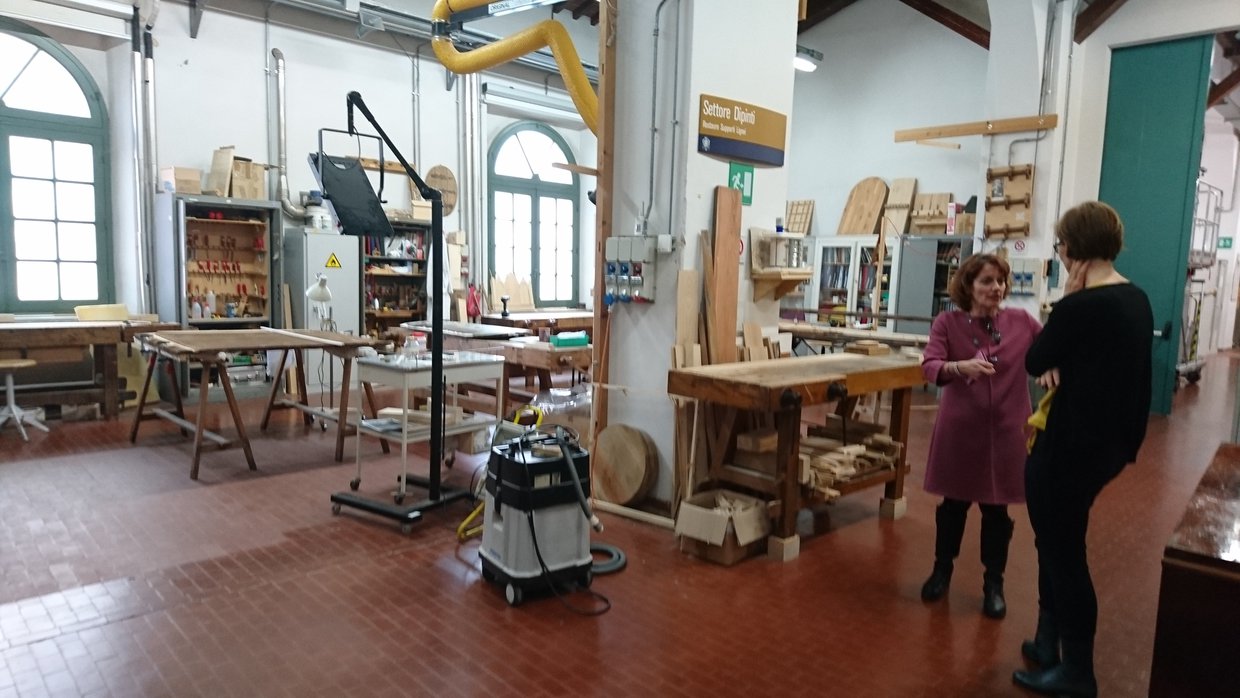