The Kunstkammer Wien was formally opened by President Heinz Fischer! 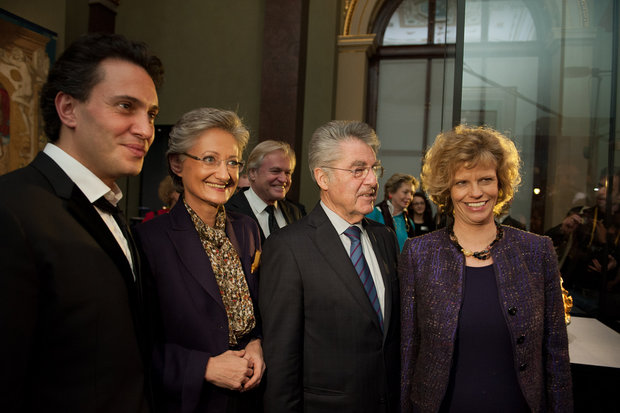 On February 28, the Kunstkammer Wien was formally opened by President Heinz Fischer, Minister of Culture Claudia Schmied, Director-General Sabine Haag, and CFO Paul Frey. Accompanied by fanfares and in the presence of Barbara Prammer, the President of the Austrian Parliament, they cut the golden ribbon; the guests attending the ceremony were the first to see the newly-installed world-famous collection, and everyone was overwhelmed by its splendor.

Among the over 500 guests were important representatives of the world of politics, such as Vienna’s city councilor for the arts, Andreas Mailath-Prokorny, the arts spokespersons of all the parties and numerous ambassadors, among them André Hebbelink, the representative of the Flemish government, the patrons of one of the Kunstkammer Wien galleries.

The celebrated tenor, Erwin Schrott, serenaded guests accompanied by the Jánoska Ensemble; in collaboration with the foundation “Anna and Erwin for Kids”, founded by Erwin Schrott and his wife Anna Netrebko, the Kunsthistorisches Museum Vienna is also supporting the singer’s charity activities.

The evening was moderated by the well-known ORF presenter, Barbara Rett. The musician and composer Rubert Huber created the atmospheric setting for the subsequent reception.

Here is all you need to know about your visit to the Kunstkammer Wien – we look forward to welcoming you soon!