The Kunstkammer at the ITB in Berlin 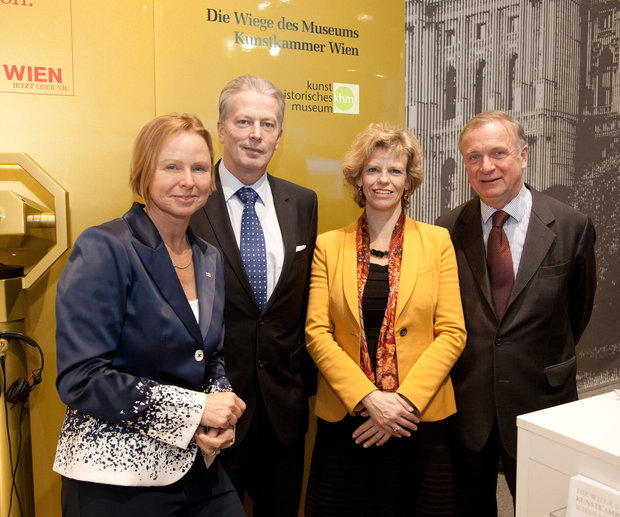 Last week the KHM, together with Wien Tourismus, presented the soon-to-be-reopened Kunstkammer at the world’s largest Tourism Fair, the IBT in Berlin (March 6-11, 2012). Following the example of the golden info-container set up outside the KHM, a golden cube was erected at the Fair where visitors could watch 3-D films that offered them a first glimpse into the soon-to-be-completed Kunstkammer.

On the eve of the Fair Renate Brauner, Vienna’s deputy-mayor and the president of Wien Tourismus, and Norbert Kettner, the director of Wien Tourismus, hosted a VIP reception attended by important business partners and representatives of the media and of different touristic institutions. Together with Norbert Kettner and the head of Österreich Werbung, Petra Stolba, the KHM’s Director-general Sabine Haag and CFO Paul Frey presented the Kunstkammer in Vienna as the touristic highlight of 2013. Among those enjoying a first view of the refurbished Kunstkammer at this event were Reinhold Mitterlehner, Austrian Minister of Economics, Family and Youth, and the Austrian ambassador to Germany, Ralph Scheide.