Big Sneak-Preview Party for the Kunstkammer Reopening in 2013 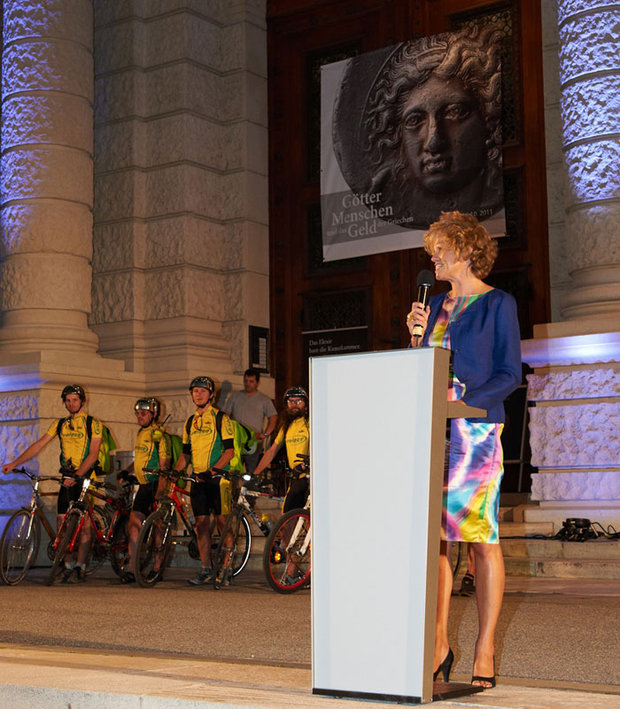 The countdown has begun: in February 2013 the Kunstkammer of the Kunsthistorisches Museum, closed for almost 10 years for refurbishing and a new installation, will reopen to the public. On Monday September 12, 2011 the KHM launched a major information and donation campaign - its motto: “Help us build the Kunstkammer!“

Director-general Sabine Haag invited VIPs from the business world, the arts and the media – among them Erwin Wurm, Gery Keszler, Roman Rafreider, Karlheinz Essl, Birgit Sarata, Eva Schlegel and Hans Staud - to be photographed with a golden bicycle helmet (or helmets) for the campaign. The helmets are now available in the KHM shop or online at www.khm.at for E 49,- wearers become “Kunstkammer patrons” and ambassadors for Austria’s most important cultural project. E 21,- of the price of each helmet goes directly to support the Kunstkammer. But you will encounter these golden helmets not only on the posters featuring VIP supporters. The riders of the bicycle courier service Veloce will be wearing the KHM helmets while riding though Vienna until the reopening of the KHM.

Director-general Sabine Haag celebrated together with Minister Claudia Schmied, over a thousand guests and the prominent helmet-wearers featured in the campaign. Revelers were serenaded by the Acis String Quartet and listened to the world premiere of musician and composer Rupert Huber’s re-composition of Beethoven symphonies and a Tosca live-remix party. Thanks to our generous sponsors, Brauunion and Radatz, Campari, Pago and Gasteiner, all proceeds from the sale of food and drink were donated to the Kunstkammer. Visitors were also able to buy the golden Kunstkammer helmets and many went home as proud “Kunstkammer patrons”. Our technology partner Samsung had installed a temporary 3-D cinema on the second floor that proved hugely popular with visitors to the party.

Among the VIPs present were some of the campaign’s testimonials - Gery Keszler, Karlheinz Essl, Birgit Sarata and Hans Staud – as well as many ambassadors and representatives of the arts, the media, the business world and politics, among them Francesca Habsburg, Andreas Mailath Pokorny, Lotto Tobisch, Peter Püspök, Christoph Thun-Hohenstein, and the major of Vienna’s First District, Ursula Stenzel.